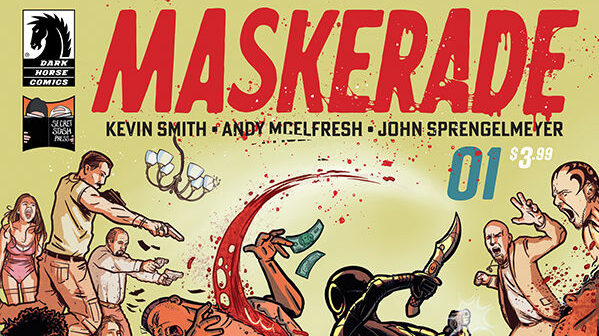 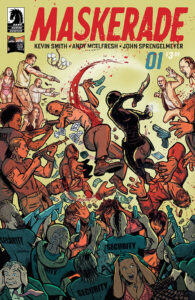 As a Kevin Smith fan, saying I was excited about his SECRET STASH PRESS imprint is an understatement. The only issue is that I’m such a fan, I paid for Kev’s Comics Club and had to wait an extra day or two to read the inaugural issue of SECRET STASH PRESS. This all-new sci-fi crime drama comes from Kevin Smith and screenwriter Andy McElfresh, with art from John Sprengelmeyer.

“Felicia Dance is hiding in plain sight. The provocative social media star and shock TV sensation has one of the most recognizable faces in the world–so she can’t capture and kill the butchers who murdered her little brother and experimented on Felicia like a lab rat when she was a child. Not unless she looks like someone else.”

The big question—was it worth the wait (and the price of admission)?

There is a lot to love in Maskerade #1—story, characters, art, etc. The most surprising thing about this issue is how much it doesn’t feel like Smith. Sure, the dialogue is written to perfection and it has a hint of his voice in there, but ultimately, this feels more in line with Red State and Tusk—a fresh take from the man behind Clerks, Dogma, and (most recently) Clerks III. That’s where the similarities start and end as this is no horror story. Felicia’s presence is felt throughout the issue, but her late appearance comes as a surprise. Not because of the reveal, but because the bulk of the issue sets up Dwayne as the main protagonist. 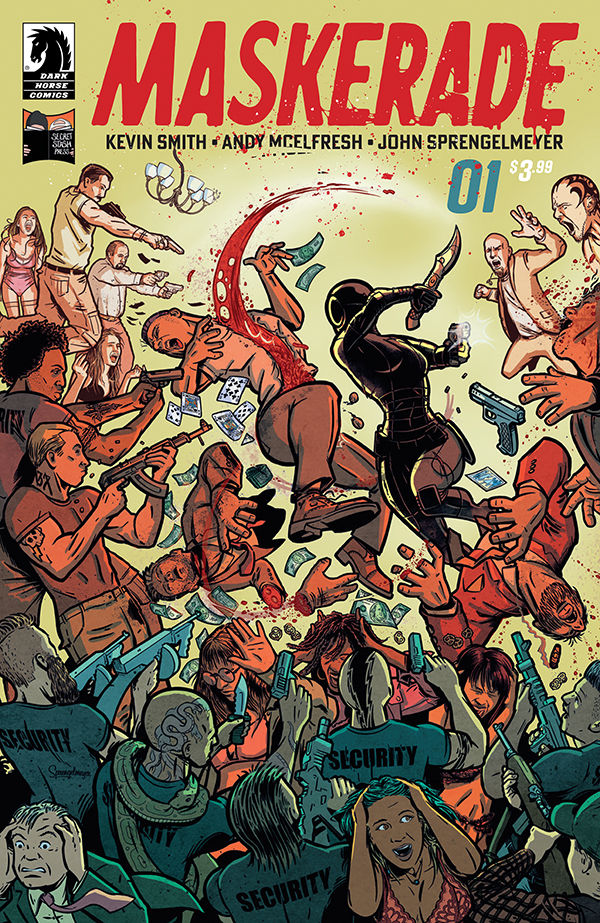 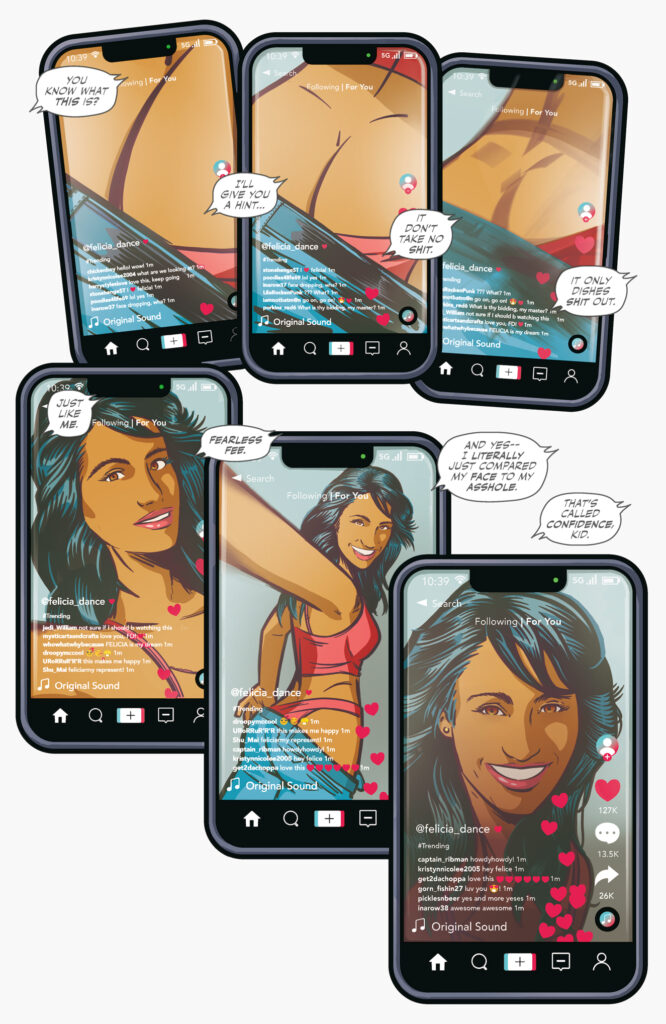 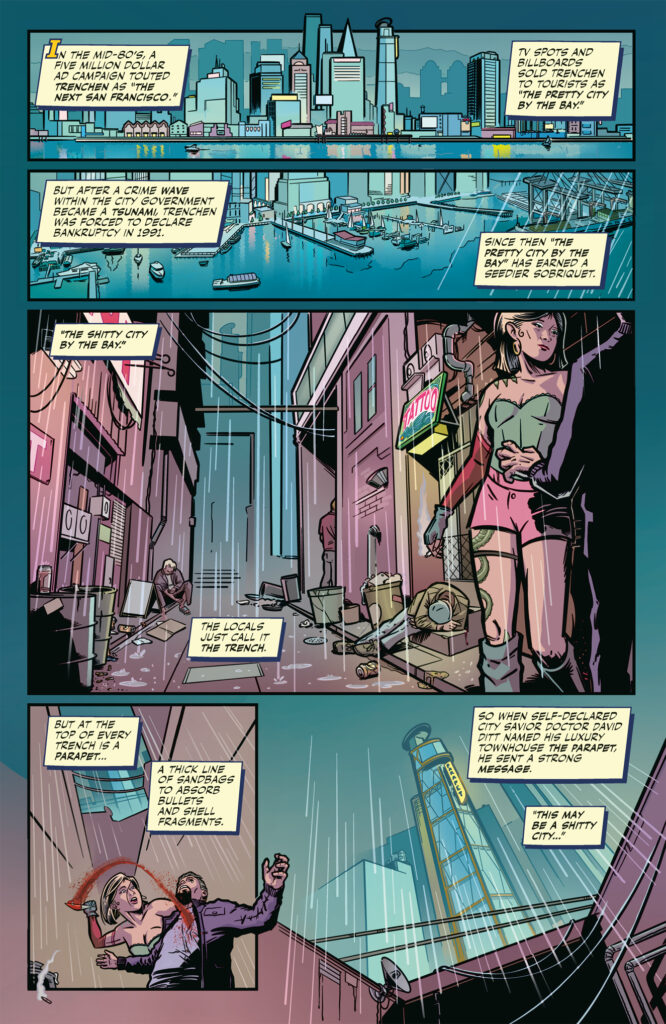 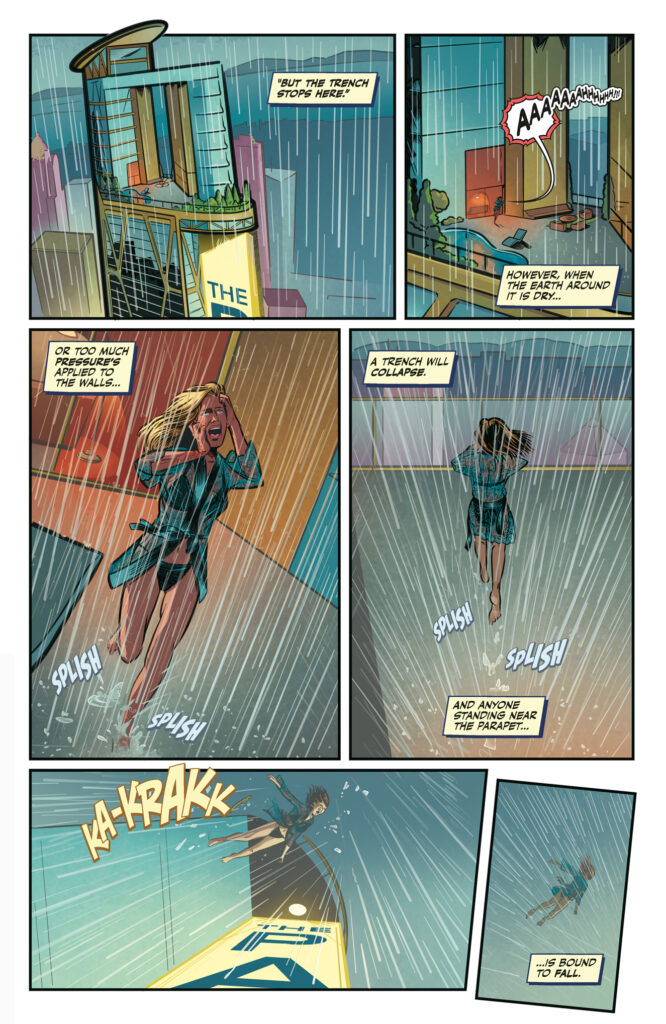 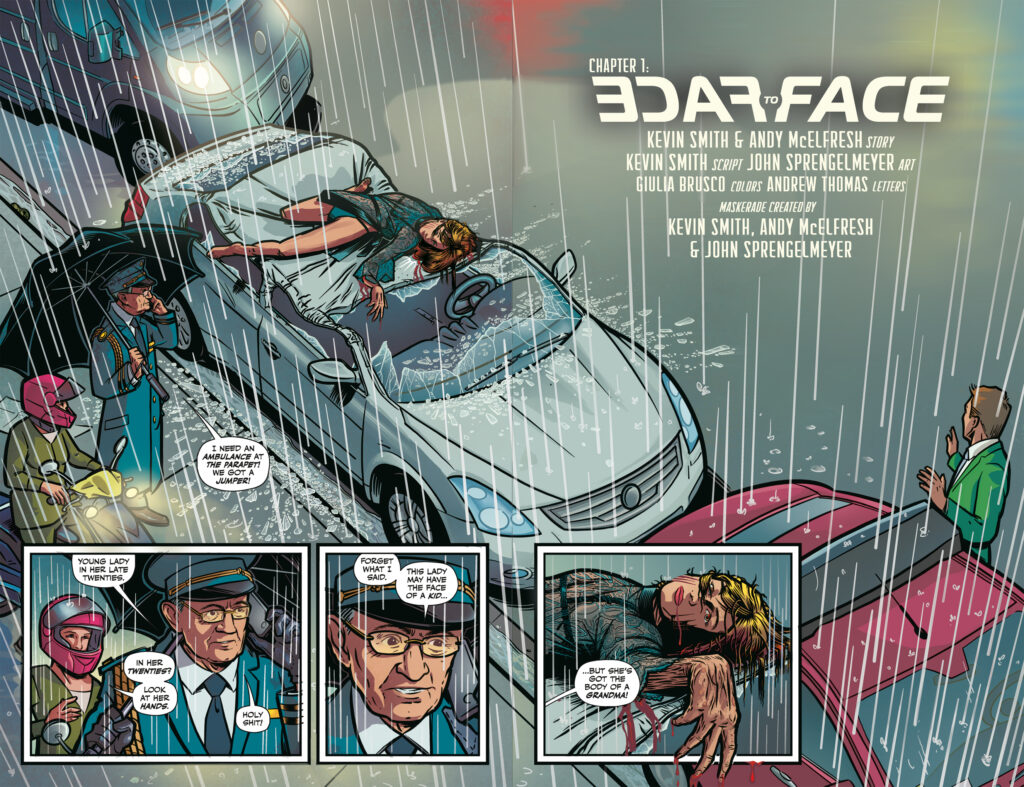 And now that I’m thinking about Dwayne, his setup in the early pages of Maskerade #1 gives me mixed emotions. While I don’t particularly have any negative feelings for him, he made his own bed, so to speak. I don’t feel bad for the predicament he’s in—looking for a work, but being blacklisted after sleeping with his co-worker (who happens to be his former bosses wife). At the same time, I’m rooting for him and am curious where his story will go once he connects with Felicia Dance and hidden truths unveil themselves.

While Smith could have played it safe with his SECRET STASH PRESS imprint and kicked things off with Quickstops or something else related to his ViewAskew universe, he took a bold move by launching with Maskerade #1. While there are definitely moments that you’re reading this and can hear Smith’s voice, this issue doesn’t play like a typical Kevin Smith project. It feels like his version of Batman, though more violent. He even paints Trenchen, the city the series takes place in, as his version of Gotham City. And while Smith has written Batman comics before, this is different—but he does know how to pay good homage (and I’m surprised that I didn’t catch any ViewAskew nods—did I miss somehthing? Let me know in the comments!).

As great as Smith and Andy McElfresh’s story is and Smith’s execution of the script, it wouldn’t come to life at all without the art of John Sprengelmeyer. The early pages capture that Gotham City-feel of Trenchen, but as the story moves to less sinister parts of town, I get hints at Metropolis. Where he really gets to shine is when the action picks up with the titular character enacting parts of her vengeance. Sprengelmeyer captures the violence that Maskerade is dishing out perfectly.

It all comes together with Giulia Brusco’s colors—when Maskerade #1 needs to feel dark and seedy, it does. When it needs to feel bright and fun, it does. The combined efforts of this creative team put together a first issue that makes you think “Was this meant for another medium?”

Maskerade #1 isn’t Kevin Smith’s first foray into comics but as the inaugural issue of his SECRET STASH PRESS imprint, he knocks it out of the park with a unique story that blends his traditional voice with that of this action-packed sci-fi crime drama. Its fast pace keeps your attention the whole time and thanks to John Sprengelmeyer and Giulia Brusco, it’s a beautiful-looking book too!

Be sure to follow That’s Entertainment for all our Comic Book Reviews!