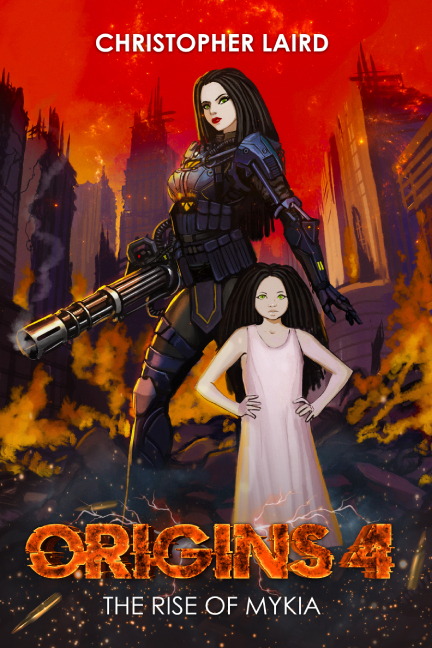 Science Fiction is a wonderful genre for numerous reasons. For me, it’s a glimpse at the potential future. Space travel. Time Travel. Aliens, new worlds. These are all things that, for now, are a fantasy, but seem plausible. Even something like Star Wars, which is not necessarily meant to be a potential future for Earth, shows me a potential for what life would be like lived in a galaxy outside our own. And sometimes I just need a good ol’ space adventure. Which is why I’m pretty excited about today’s promo!

Origins 4: The Rise of Mykia by Christopher Laird

It’s the 28th century and the alien race known as the U’harans have long since defeated the Mykians and enslaved their people, kidnapping the women for prostitution and keeping their children in concentration camps. The source of the U’harans’ power comes from a particle that has made them all but invincible and there seems to be no way of defeating them.

In Christopher Laird’s fourth book of the Origins series (The Rise of Mykia), the only chance for the Mykians appears to be Deltacore Captain Michael Stratford, former dictator Xona Bari, and her daughter Zeniyah. However, their unique abilities to fight the U’harans are slowly being diminished. Not only are they losing their ability to fight and resist as time goes on; they’re dying. Their last hope is obtaining the particle that gives their captors their power and using it to restore their own strength. Alas, there is an issue. The particle can only be found on Earth… in 1953.

The tenacious trio must now go back in time and break into the covert facility where the particle is kept. If they are to have any chance at success, they must conquer nearly insurmountable obstacles, save allies, and vanquish a slew of Earthly foes who are determined to stop them. The race is on. Nothing less than the future of the Galaxy is at stake.

Detroit-born novelist, Christopher Laird, has been writing science fiction since he was 15 years old. He’s taken that passion and made his dream come true by publishing two best-selling novels—Origins and Eternity’s Past, as well as Origins 3: The Children of Mykia. Laird is currently putting the finishing touches on the second season of his stage production, The True Meaning of Christmas: From the Perspective of an Alien; which is the unofficial third book in the Origins series.

While he’s a graduate of Wayne State University, Laird is currently pursuing a degree in Psychology at Harvard University. He’s also an active board member of The Detroit Institute of Arts and the Detroit Zoo; helping them support their growth and become recognized institutions. Ultimately, his journey is to reach new bounds as he writes compelling stories.

Laird’s Amazon best-selling novel, Origins, is currently being optioned for a movie, and he currently has stories that will be turned into stage plays. Keep up with Christopher Laird as he works to lead science fiction into a new era.

You can purchase Origins 4: The Rise of Mykia on Amazon, Lulu, or directly from the author’s site.

Amazon links in this post are affiliate links. When you click these links, you can continue to shop Amazon without any change to your experience—we get a small kickback… you pay the same great prices and get to support us at the same time!