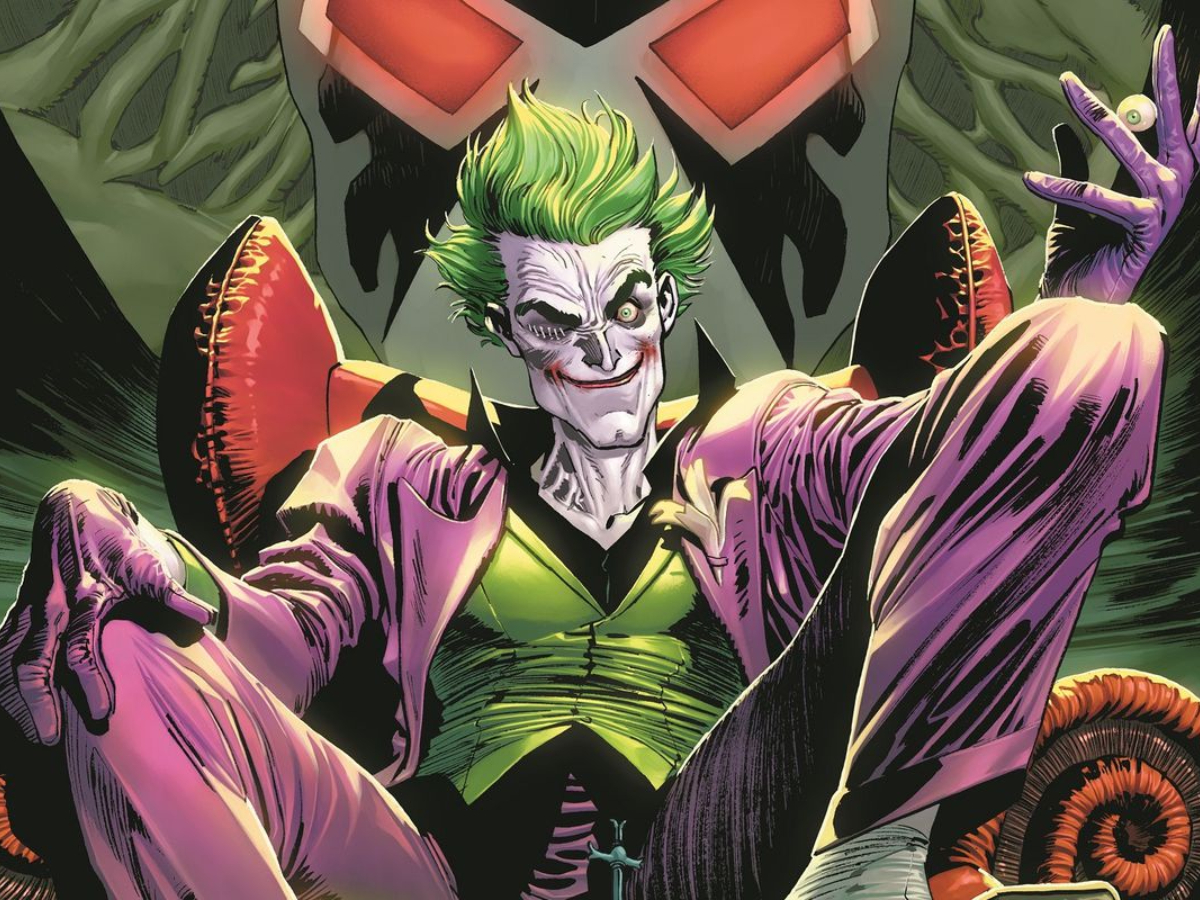 As I ease back into writing comic reviews, I’m playing catch up on titles I was previously reviewing; first up is The Joker. You can check out my previous reviews for this title on Dark Knight News, with The Joker #7 review here. One of the things that is both great and odd about The Joker is that it’s really a James Gordon book, sometimes only ever giving a page or two to the titular character. There’s been a lot of ups and downs with the book, with the backup story Punchline having many more downs than ups. That said, let’s get on with some rapid-fire reviews of The Joker issues 8 through 12, including the 2021 Annual. 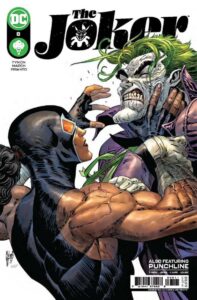 The kicker here is that I had written a full review of The Joker #8 but lost it in the months that I slipped into some depression. That said, this issue continues the rollercoaster trend—it’s a huge step up from the previous issue. We get some great backstory about Vengeance, which actually turns her into a very sympathetic character (despite the ripping of an Interpol agent’s arm off). And the big issue I had in the last issue was the lack of the titular character. While The Joker is not actually in The Joker #8, the explanation of what Vengeance would do to him if she caught up with him brings him into the story just enough to make this a really great issue. Tynion, March, Prianto, and Napolitano all do great work here.

The next chapter in the Punchline backup story is actually quite decent. Now, I also barely remember the previous chapters (save for the first one or two, which were easily the best of the backups thus far). There’s some great action, it feels like the story is moving forward, and there were stakes! Really happy with Johns, Kämpe (taking over for Sweeny Boo in excellent fashion), Louise, and Maher this time around. 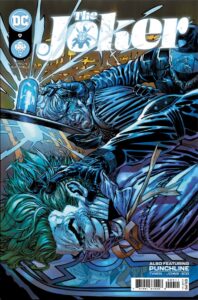 It wasn’t until the final pages of The Joker #9, when Jim and Vengeance walk in on The Joker and Dr. Friedich Baum that I had remembered that this was another issue I had already read and written a review (that has been lost to time) for. And while we returned to the noir-style monologues of Jim Gordon, they weren’t all “woe is me”. In addition, the final pages, when we see the Joker and the odd Doc, are some of the best work we’ve seen in this book. Tynion continues to push the story forward in exciting ways and Raffaele’s art with Fajardo’s colors is more my style. It also looks like we’re going to be getting more of the Sampsons, who are the most intriguing villains to come from this book.

Punchline Chapter Nine also continues to show promise. Johns has been pushing the story forward more in the last chapters than previously done before and Chapter Nine finally touches back on the first part of this story. Seeing Leslie Thompkins and Harper Row together again brings back that Law & Order type feel, which is what I’ve wanted out of this backup story since the beginning. I’m not sure how long this backup story goes for, but it’s shaping up to finish strong. 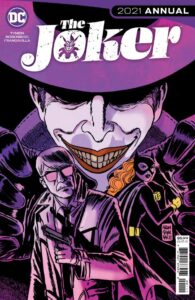 I think the thing I dislike the most about The Joker is that it’s false advertising. Yes, it’s about the clown prince of crime, but it certainly doesn’t star him. This is a Jim Gordon book. Which, honestly? I love. The series has been a rollercoaster, but overall, it’s been a solid book. Now, flashback issues tend to be very hit or miss for me. The Joker Annual 2021 though? WORKS. The whole time I had the feeling that this was going to lead up to The Killing Joke, which would have been cool, but I’m glad it didn’t directly lead up to it. The story lives on it’s own, shows that Jim has known about Barbara for a long time, and answers why Jim may live with a lot of guilt. Gotham was doing well and he cleaned it up too much. Rosenberg and Tynion delivered a decent story while Francavilla did an excellent job on the art and colors, giving the story a true retro look. 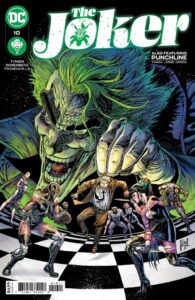 I honestly wasn’t expecting another flashback issue. It made sense for the annual and we’ve already had one in the series, so The Joker #10 caught me off guard. But damn, I loved this one. I can’t tell if it’s because it’s been a while since I’ve read comics or if Rosenberg and Tynion are just knocking it out of the park (probably the latter). It makes sense that this directly followed The Joker Annual, it feels like both these issues bookend The Killing Joke and we get a good sense of what state Jim Gordon is in. And yet, the Gordon we see in this issue isn’t completely broken by the Joker yet.

Punchline Chapter Ten was OK. The first part is the most interesting; it really must be the partnership of Leslie Thompkins and Harper Row I like in these series. Once we get to the back half of this story, with Harper’s brother, it gets less interesting. Though I suppose those two threads will eventually meet, it’s currently dragging the interesting part of the story down. 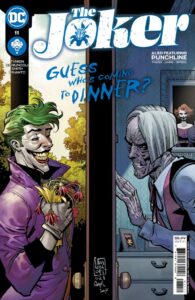 *claps hands* Bravo Tynion, bravo. This was a near-perfect issue of The Joker. The noir-style monologues are at their best and everything (and everyone) is starting to come together. The artistic team, of which there is a lot in this issue, gives what I think is the best work of the series to date. In early reviews, I often criticized the way Gordon looks like an old, gruff, Clint Eastwood type and that the design of the Joker was not my favorite. However, they nail everything here. And I love that the Sampsons are becoming the center of everything. While it’s clear they are just another piece of the puzzle, the fact that they will be the primary focus for at least another issue is just too exciting.

And to further push this issue in the right direction, Punchline Chapter Eleven is great. Once again, the stuff with Cullen Row is the least interesting, BUT it’s finally starting to come together. Kelly has found herself in quite the pickle and the Law & Order: Bluebird team isn’t having luck with convincing the rest of the legal team that Kelly’s story is the best thing they have to put Punchline away. It really feels like the story is about to wrap and it’s proving to make everything worth it. 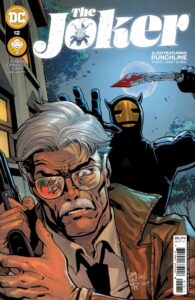 I suppose if I’ve been more up on the happenings of DC Comics, or at least the Bat-side of things, I would have been more impressed with the ending of The Joker #12. That said, this was a very good filler issue. Normally, I’m less than thrilled about filler issues. They’re clear attempts at trying to stretch the story an extra issue or two. However, this one helps set the stage and the stakes of what feels like a conclusion that is very close to happening. Plus art continues to crush from Gamuncoli and Smith (with continued wonderful colors from Prianto and Fajardo).

Punchline Chapter Twelve also felt like a bit of a filler. Some forward progression, but less than the previous chapter. As Aiden said, various loose ends were tied up in this chapter, with a big question mark on Kelly’s whereabouts—it obviously feels like she was taken in the previous issue, but it’s odd that no one escorted her home? So how is it that Leslie Thompkins is just realizing that Kelly is missing? THAT’S a loose end that needs to be tied up narratively.

And we’re caught up. Well, The Joker #13 was released earlier this week, but I’ll be reviewing that on its own. I’m a little behind where I wanted to be with this, but I’m lined up to have it posted to the site later this afternoon! Stay tuned!