I’ve always invested my time into feature-length films or TV shows but having dived into some shorts recently, there is an art to them. That’s not to say that they are “artsy”, but that you have to tell a complete story in a short period of time, right? With TV shows, you have the benefit of exploring that story for multiple episodes. In a short film, your mission is the same as a feature-length film—three acts with a beginning, middle, and end—but with far less time. Ticking does this, and more. 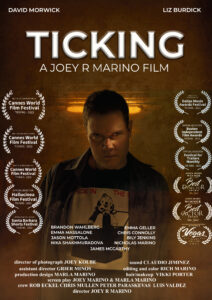 Ticking is a drama that follows the dark journey of a young man Micheal, in order to keep his mother’s rapidly fading affection, because he found a new love he becomes unstable. A film journey that brings to light the repercussions of parental neglect and internal self-loathing.

Ticking is a fascinating story of internal conflict, trauma, sadness, love, and life that has won numerous awards. The short drama film, which Joey R. Marino directed and co-wrote with Marla Marino, examines frequently neglected thematic issues in contemporary cinema. The story revolves around Michael (David Morwick), a troubled and lonely young man who is trapped in the enormous maze of life. Michael’s story is one of emotional manipulation, emotional abuse, and neglect from his narcissistic, insecure mother (Liz Burdick), which makes him hate her. When Michael, who is already mentally ill, meets Marla (Emma Massalone), he falls in love with her, further complicating his already chaotic existence. Michael’s life spirals out of control as a result of Marla’s real love and care for him, which only makes things worse.

Joey Marino’s film, which combines themes of family, love, separation, neglect, and abuse, takes us on a journey through the murky, shady places that are constantly present in many of our lives. Ticking shines a spotlight on features of modern life that are hidden from view. In a world full of lifeless movies, it is a breath of fresh air. You can watch Ticking now, on Vimeo. You can also find out more about Joey and Marla Marino and their work on Joey’s website or by following him on Instagram.