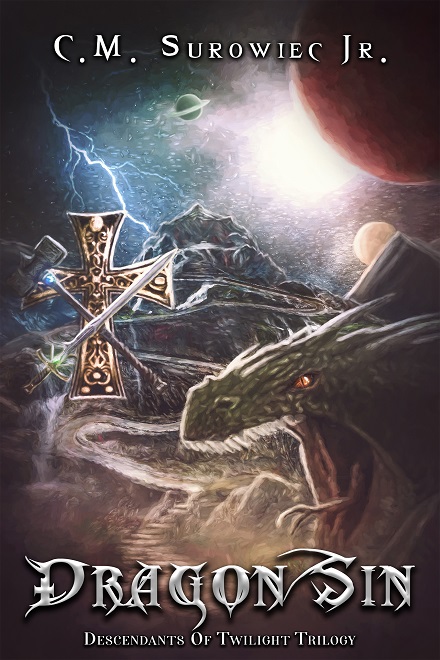 Greetings Otherworld travelers, and welcome to our final stop amongst the cosmos, and the worlds of other incredible writers.  We’re actually looking at a fantasy today that has a huge cosmic feel to it that I’m certain will leave you in awe and wonder.  To learn more, read on, and discover the world of Erogoth.

If readers are looking for a substantial world with a familiar enough structure at first glance, they might be tempted by the debut work of author C.M. Surowiec Jr, DragonSin, Descendants of Twilight, Book 1.  After spending some time in his world, though, they’ll soon find that there’s a huge break from tried-and-true traditions however.  Surowiec has been working on this literary universe for a very long time, and it shows with his meticulous grasp over everything in the well-balanced first tome he unleashes upon fans of the genre.  Between his vast, far-reaching history, and his take on the nearby cosmic portion of his world, everything leaps out at the reader and assures there’s much more here than meets the eye, though some of it is understandably still wrapped up in its mysteries.

Erogoth:
A planet with four moons and inhabited by humans, dwarves, elves, and many other races had thrived for millennia. However, four centuries ago, Ledaedra the Dark, Queen of the Dragons, emerged with unyielding force, and her horde of ruthless dragons became a scourge to all others.
No one knows that better than sixteen-year-old Cymm Reich, who returns home to find his family massacred and village razed. An internal battle rages between remaining true to his beliefs and his growing need for revenge. While Cymm struggles to discover himself and his place in the world, he is tempted by evil and follows a path driven by vengeance. The young man begins his journey unaware he possesses a unique trait that even the deities would kill for.
As Cymm’s fears and self-doubt escalate, the benevolent Terazhan offers him a glimmer of hope to defeat the dragons responsible for murdering his loved ones. However, a dark secret entwines this gift of power, and the chain of events set in motion could change many lives forever. Meanwhile, a priestess named Lykinnia has captivated Cymm, but has her own unique issues and challenges.
Invaluable friendships and enemies are made by an upstart Cymm on his epic quest to slay the dragons.

Erogoth is a diverse, complex world that never seems overbearing or underserving.  Rather the planet and the books that take place on it have a beauty and a brilliance that feels refined and deliberate.  The worldbuilding doesn’t ever seem as though its being force-fed to the reader.  Rather, everything feels earned and rewarding.  With that in mind, it should come as no surprise that the author has more planned beyond this debut.  There’s never a better place to begin than the start though.  Preorder DragonSin – Descendants of Twlight, Book 1, on Amazon today!

The post Fantasy Promo – DragonSin – Descendants of Twilight, Book 1 was originally posted on Tellest.com.  Please note, as an Amazon associate, I earn from qualifying purchases.