Greetings Otherworld travelers, and welcome to the first urban fantasy promotion of the new week.  We’re traveling back and forth between worlds in today’s stop, and there’s certainly magic to be found here.  If you’re into portal fantasies, you’re in for a treat.  Read on to learn more about Realms Apart.

Author Jonathan T. Salisbury has already delivered one wonderful fantasy with the first book in his Portal and Key Chronicles book.  Now, the sequel to Blood Bonded is here, and it is just as magical as the first.  Realms Apart is instantly catching, as it has interesting and prose that is written very well and will keep readers engaged.  Salisbury doesn’t just write flowery description.  His action sequences are exciting, and there is a flair of adventure present throughout.  It helps that he has a strong female lead that impresses in one chapter after another, but the author also has antagonists that are fiendish, and readers will love to hate them. 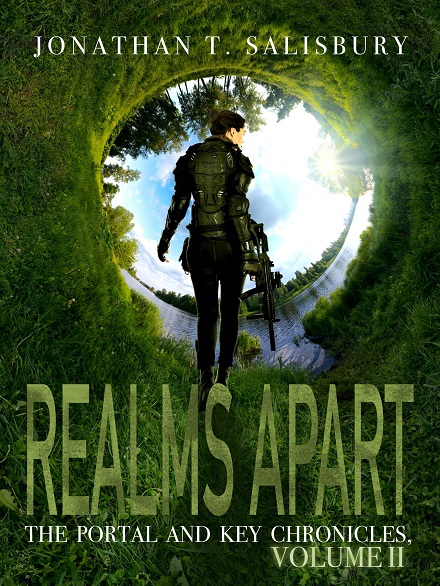 REALMS APART (360 pages) is an urban fantasy novel set in both, modern-day Earth, and the fantasy realm of Faetir. It is the second novel of the Portal and Key Chronicles, and a sequel to “Blood Bonded” (Austin Macauley, 2021).

Eva Higgins has returned to Earth after escaping the evil clutches of Ceann Olc on Faetir. The Olc, who killed her best friend, Derek, forced Eva to use her powers and portal back to her home on Earth. She has lost her blood bonded mate, Calder, and is no closer to finding answers about her powers or her past. Worse still, coming back to Earth has put Eva in the crosshairs of her old nemesis, Mr. Roper. In an ambiguous turn of events, however, she strikes a precarious truce with him after they discover a common enemy in the Olc.

As pieces are moved around the board, Eva portals back to Faetir to seek alliances in a war to defeat the Olc. As plans unfold Eva’s world is shattered when she uncovers two secrets: One kept from her by her Most Trusted, Brynjar, and the other by her enemy, Ceann. Eva is left with a choice — stay true to her convictions, or follow her heart.

Realms Apart takes place in such a rich realm that just combing through the author’s handy glossary in the back of his book can be exciting.  There’s a whole world that exists here, and it feels alive and filled with history.  It is certainly recommended that you pick up the first book in Salisbury’s series, but you can actually read book two and go back to fill in some blanks later if you so choose.  Salisbury delivers a solid enough book that it could stand alone and reference back to the original book even without someone needing to read it.  If that piques your interest, don’t sleep on this sophomore title in the author’s series.  Check out Realms Apart: The Portal and Key Chronicles, Volume II on Amazon today!

The post Urban Fantasy Promo – Realms Apart: The Portal and Key Chronicles, Volume II was originally posted on Tellest.com.  Please note, as an Amazon associate, I earn from qualifying purchases.