Greetings everyone, and welcome to our newest stop to the Otherworld.  It’s going to be a great week, and with that in mind, we’ve got a great, epic science fiction book that I’m sure you’ll enjoy.  I’m sure you’d rather spend your time reading, so let’s quit wasting time and introduce you to The Rings of Hesaurun.

Peter Harrett writes his story with vivid prose, and enthralls you in an otherworldly yet familiar setting.  In The Rings of Hesaurun, the author takes you on a journey across not only the galaxy, but indeed, even time.  Harrett balances prophetic warnings, dastardly villains and a world on the verge of endless turmoil, and all to great effect.  Readers won’t be able to pull themselves away from one page or the next. 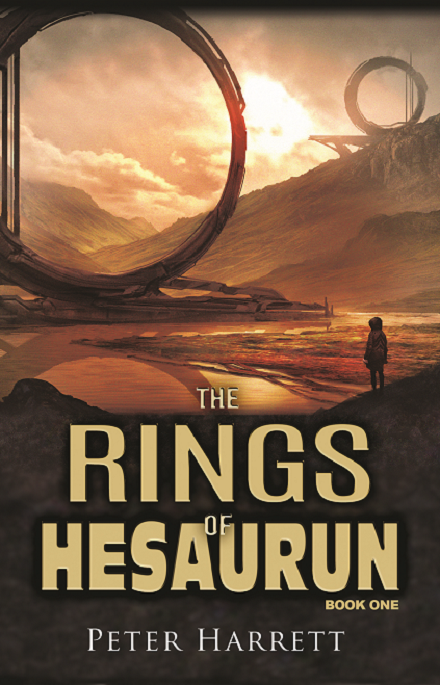 Fleeing an alien menace of galactic proportions, a starship named The Dreamer crash-lands on Earth in the year 2436 BCE. Responding to the crash, the primitive earthlings discover the ship’s commander Valerie Dunne is a 5,000-year-old woman from the future, forced to escape her nemesis, the Boecki, by hiding in the past. Soon they learn the fate of the future world now rests on this strange woman’s ability to harness five Hesaurun rings — rings with the power to destroy, heal, and manipulate time — and somehow, to find a way to alter her own destiny.

An epic Sci-Fi tale of good and evil, rescue and survival, betrayal and love, and a threat to mankind unlike anything the human race has ever faced, The Rings of Hesaurun: Book One burns with the scope and imagination of the greatest Fantasy novels of the golden age. Weaving in a huge cast of humans and aliens, Peter Harrett has crafted a galaxy for readers of the 21st century to believe in…immense, ancient, and mind-bending.

Harrett’s wonderful debut has been described as a feast for the imagination, and it’s plain to see why.  With interesting characters, a premise that feels fresh while checking a lot of interesting pop culture boxes, and enough lore apparent to explore things for many books to come, it’s easy to get lost in what the author has created.  If you’re looking for a captivating science fiction that will keep you on the edge of the seat, look no further.  Check out The Rings of Hesaurun on Amazon today!

The post Sci-Fi Promo – The Rings of Hesaurun was originally posted on Tellest.com.  Please note, as an Amazon associate, I earn from qualifying purchases.