Greetings travelers, and welcome to the first Otherworld stop we have prepared for this week.  We’ve been spending a lot of time with science fiction over the last week or so, but today we’re stepping through to another world, and will be able to enjoy our first portal fantasy in a while, and it just so happens to be a LitRPG as well.  Read on to learn more about The False Hero.

Michael Plymel’s debut LitRPG is a doozy, with an interesting balance between a traditional portal fantasy and an LitRPG.  The False Hero, Volume 1, takes the best parts of both genres, and blends them together efficiently.  The characters are varied enough from what you’d typically see in either type of fantasies, and it has you eager to learn more about what paths they’ll ultimately go down.  Plymel isn’t afraid to go down some darker avenues, and he toes the line with a character who feels like an interesting anti-hero, with some not-so-heroic tendencies as well.  And illustrations by several artists make the plot pop even more. 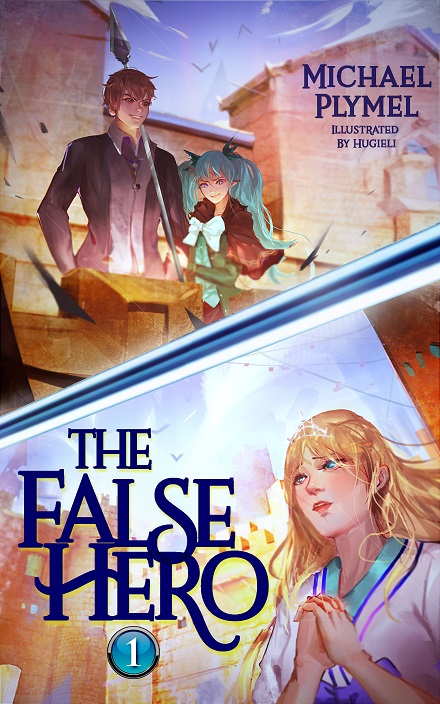 Disillusioned businessman, John Lawrence Locke, finds himself summoned as a hero to another world, filled with monsters and magic! With his body reverted to the age of fifteen, the thirty-three-year-old’s mind is filled with the possibility of battles and adventures, like the ones in his favorite video games.

Unfortunately for him, life isn’t always so convenient. Betrayed by the very people who summoned him, he’s condemned as the False Hero and forced to flee for his life. Alone in an unfamiliar world and hunted by all of humanity, he takes on the alias of Lutz and uses his gaming knowledge to quickly adapt to the world’s strangely game-like mechanics.

Plymel’s book rips forward at a roaring pace that will have readers furiously turning the page.  Before you know it, you’ll be in the final chapters—looking at bonus content the author has so graciously included—itching for more.  If you’re into fantasies with a darker edge, or watching characters grow to incredible strength in LitRPGs, Plymel’s debut will have you eager to go, and excited for an eventual sequel.  Check out The False Hero, Volume 1 on Amazon today!

The post LitRPG Promo – The False Hero, Volume 1 was originally posted on Tellest.com.  Please note, as an Amazon associate, I earn from qualifying purchases.