Greetings otherworld travelers, and welcome to our final promotion of the week, our last stop at a written universe far beyond ours.  Today, we have a dark fantasy for you that could be perfect for those of you who are a bit mischievous, and like to see the darker shades of grey in the world.  If that sounds like it would be up your alley, step Between Worlds.

Author Aureane Desaysgam has already made a name for herself in her native France, but she has made the decision to try and conquer other nations with her fantasy Between Worlds: Funambule.  Her book embraces dark content set in a ruthless world, introducing readers to a main character who is stripped of emotion, never having really found a truly happy experience.  With such tough material to work through, you’d be forgiven for thinking the content would be hard to chew through, but Desaysgam’s tale is immersive, and it runs forward at a quick, entertaining pace. 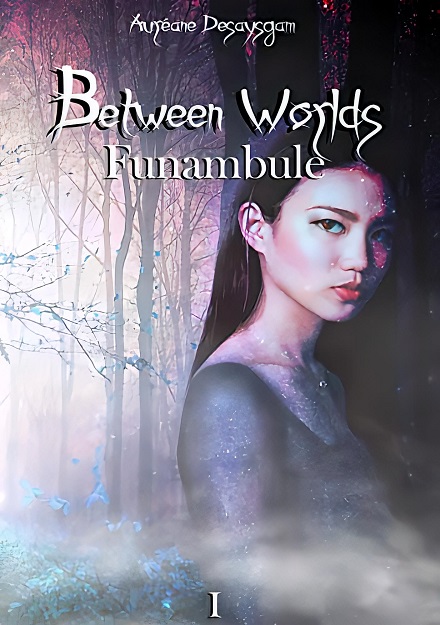 She knows nothing of this world except the darkness and gloom in which she has lived for ten years. Lulled by screams, fed by violence, and dehumanized, she had lost every notion of life and happiness. But now a glimmer of hope has come to pierce the darkness that inhabits her. Today, she has been bought. Today, she will finally leave this hell that saw her grow up, and taste a kind of freedom. But who is this mysterious man who bought her? Can she believe him when he says he expects nothing from her? Between mistrust, uncertainty and love, let yourself be guided in this fantastic adventure.
Despite the darker shades that Desaysgam uses to paint her story, everything is coated in a variation of the color grey.  There are real layers to the characters, from the ones you immediately feel for and want to see liberated, to the ones you peg as evil at the onset of the story.  The author manages to make everything seem compelling in its poetry.  It moves with enough fluidity that readers will reach the end quickly, and be hungry for more.  The French language version of the second book is already out, so you know it won’t be long before it makes its way stateside.  With that in mind, there’s never been a better reason to own the first book in this chilling, entertaining series.  Check out Between Worlds: Funambule on Amazon today!
One aside that’s worthy of note: French language books are a bit different in their presentation than what most people who read in the United States are familiar with.  French novels will often employ guillemets (<< and >>) or em-dashes to depict dialog.  That is the case with Between Worlds, which might catch certain readers off guard at first.  But it almost feels at that point like watching a foreign language film with your own narrative voice creating the subtitles!

The post Dark Fantasy Promo – Between Worlds: Funambule was originally posted on Tellest.com.  Please note, as an Amazon associate, I earn from qualifying purchases.