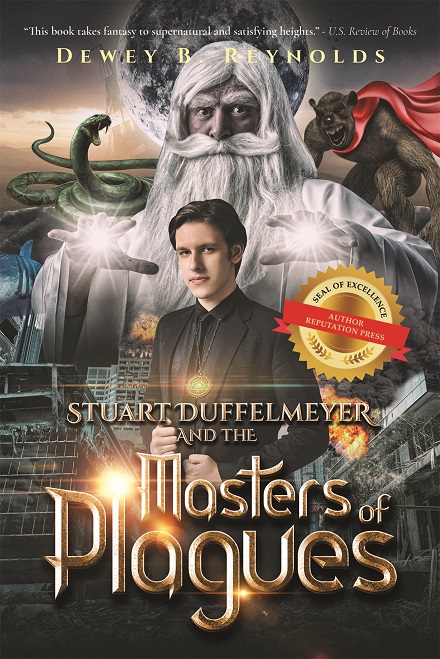 Hello travelers of the Otherworld, and welcome to our final promo of the week, and our last one before Christmas!  We’re going out with a bang, with likely only a couple other stops before the end of this year.  Today’s stop is a doozy of one, so make sure you’re holding on tight.  Read on to learn more about Stuart Duffelmeyer and the Masters of Plagues.

Author Dewey B. Reynolds has the type of background that makes his descriptions jump off the page.  With scriptwriting in his toolbox, he effortlessly provides entertaining and colorful material for his debut Urban Fantasy, Stuart Duffelmeyer and the Masters of Plagues.  He also produces witty and wordy dialog which elevates the story, be they dripping with ill will, or part of a vengeful soliloquy.  Reynolds is also unabashedly unafraid to poke fun at his protagonist, or to go the extra mile in certain descriptions that take things over the top in delightful ways.  If readers want a sort of balance between crude and refined in their urban fantasies, they’ll certainly find it here.

When a cruel prank is played on him by his college classmates, Stuart seeks to exact his revenge through the powers of a magical Hebrew talisman.

He soon gains control over the creatures and elements of the Earth. The need for revenge against his former classmates grows stronger by the day.

All of them are taught a valuable lesson, while Stuart also utilizes his powers to champion for the disadvantaged.

At the foundation of his urban fantasy debut, Reynolds has something that quite often is missing from other stories that take themselves too seriously.  Stuart Duffelmeyer is quite simply a fun romp that shows where an imaginative story can take us.  It’s quirky and even oddball at times, but it wears those distinctions proudly.  While there is endless potential for more stories within this world, this first book is revenge at its best, and an awesome place to start.  Check out Stuart Duffelmeyer and the Masters of Plagues on Amazon today!

The post Urban Fantasy Promo – Stuart Duffelmeyer and the Masters of Plagues was originally posted on Tellest.com.  Please note, as an Amazon associate, I earn from qualifying purchases.