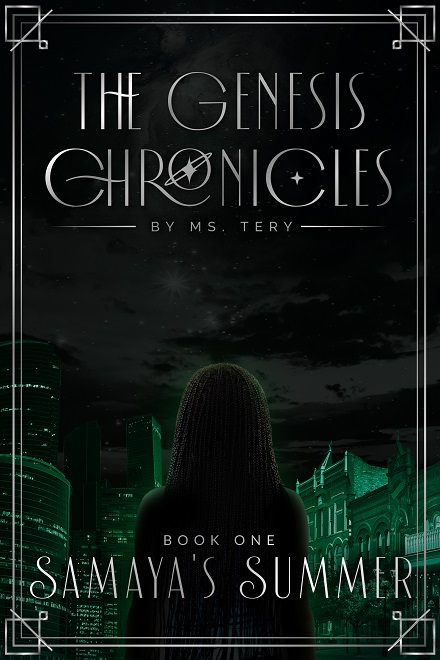 Good morning!  It’s been a quick-paced couple of weeks as we’ve made more stops to the Otherworld than any time in the last several months, and that doesn’t show any signs of stopping anytime soon.  Today, we’ve got an awesome series starter in Samaya’s Summer, a contemporary fantasy that could just become your new favorite.  Read on to learn more.

Author Ms. Tery writes endearing characters.  In Samaya’s Summer: Book One of the Genesis Chronicles, that is the first thing readers will come to learn.  Even without the interesting events unfolding in the region, Samaya and her new friends are a breath of fresh air to spend time with.  Even though Samaya can be shy, quiet and even delightfully awkward, her relationships with her family and the people she meets are warm and wholesome, and her inquisitiveness drives the whole of the story.

Samaya Lewis is not your average girl. She’s shy, anxious, and lives for basketball— a “hobby” her mother fears is consuming her life.

Fourteen-year-old Samaya is also good at something else. Missing curfews.

After missing one too many curfews, her mother devises a wicked punishment—a ninety-day trip to her Aunt Cece’s house in the country, without basketball.

Just when she thought buying a dress and meeting a boy were the worst of her problems, Samaya and a new friend stumble into a sinister plot involving a strange man with a powerful secret—one that may spell doom for the rural community of Willow Ridge and possibly the world.

With new friendships, family, and basketball on the line, Samaya must choose what’s most important before the sun sets on her summer.

Ms. Tery’s debut is witty, charming, and captivating, and the more time you spend with Samaya and her friends, the more gripped you’ll be by the tale.  Samaya’s Summer is the kind of contemporary fantasy that you can’t get enough of, and because of that, readers will be thumbing through pages with great interest.  And with the sequel on its way very soon, there’s never been a better time to pick up the first in this series.  Check out Samaya’s Summer: Book One of The Genesis Chronicles on Amazon today!

Also, don’t forget to check out Ms. Tery’s website here to see more about the series, including excerpts, art, and info about the author.

The post Urban Fantasy Promo – Samaya’s Summer: Book One of The Genesis Chronicles was originally posted on Tellest.com.  Please note, as an Amazon associate, I earn from qualifying purchases.