Greetings Otherworld travelers, and welcome to a new promotion, and an opportunity to venture to a new world—or a new way of viewing our own.  There have been plenty of angels and demons fantasy stories that we’ve seen throughout the years, but we don’t often see one that’s more allegorical and humorous.  That all changes today, as we learn about Hell vs. Heaven.

Author Reinhold Fuchs, also known as Ryan, The Devil Fox, has created a charming and satirical look at some of the Christian folklore and mythology that accompanies the biblical teachings.  Hell vs. Heaven turns certain expectations on its head, and though it starts off with a tremendous amount of tongue-in-cheek jokes and ribs, winking along as it goes, it somehow pulls readers in close, and even develops a rather heartwarming story.  It weaves humor and lore throughout its tapestry, ensuring that its audience receives some well-earned “aha” moments that drive the narrative forward, rather than just exist as a series of interconnected jokes. 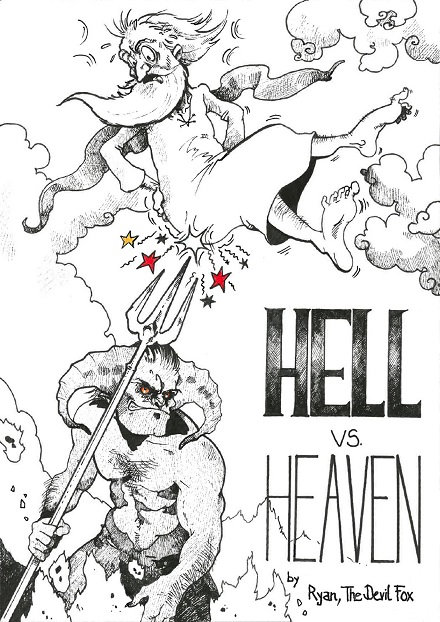 God and his entourage are the mad guys, excuse me, the bad guys.

The devil, his wife Ava and their three children – Abbadon, Lilith and Set stand for good and the well-being of the humans.

Each one thousand years a battle is fought between the two sides. A battle that can only be fought, if they merge their bodies with those of humans.

Those will be the chosen ones. God and the Devil now each get assigned a chosen warrior, to fight for them.

God gets Frank Myers – a smug, selfish bastard. Lucifer and his family get to work with “Ryan, The Devil Fox” and his three children – Luke, Lina and Romeo.

But there is still one person missing for Ava! Another person is chosen by the Oracle!

That is the Medium, who has a more than special power. This power will later become a great asset for one of the two sides! All depends on which side the Medium chooses to fight for! And will Ryan finally find his true love?

For now only one thing is for certain. Ryan owns an imaginary joke machine, that will make you laugh your @ss off!

It is apparent at once that the author had great fun writing the tale, and that he has more yet to introduce to the world.  Moving at a quick pace that makes each of the story’s chapters feel fun and bite-sized, readers will have the story done in a snap, and may be eager for a follow-up.  Fuchs’s work is certainly meant to delight, and not to stir up any trouble, divine or otherwise.  If readers are looking for something that is charming despite its demonic nature, this may be the book for them.  Check out Hell vs. Heaven on Amazon today!

The post Urban Fantasy Promo – Hell vs. Heaven was originally posted on Tellest.com.  Please note, as an Amazon associate, I earn from qualifying purchases.