Greetings Otherworld travelers, and welcome to our next promotion of the week.  We’ve bounced from a light fantasy to a speculative science fiction with deeper meaning that could give us a look at a dark future for ourselves if we find ourselves in pursuit of a key to immortality by any means necessary.  If that sounds interesting to you, read on to learn more about Suspended.

S. L. Hemm has a love and respect for technology which translates well into a study of speculative science fiction, whereby you can imagine progress and the hopes of a better future, or the coming of our doom, if we are destined to regress because of our hubris.  Hemm’s interest in virtual reality becomes an exceptional foundation for his debut, Suspended.  Hemm’s book shows that technology, when used improperly, can take dark and ominous turns, and that sometimes, we can be the progenitors of our own grief and downfall.  But it is not just the technology that keeps readers rooted and captivated.  Hemm has created characters here who the audience will want to remain alongside, every step of the way. 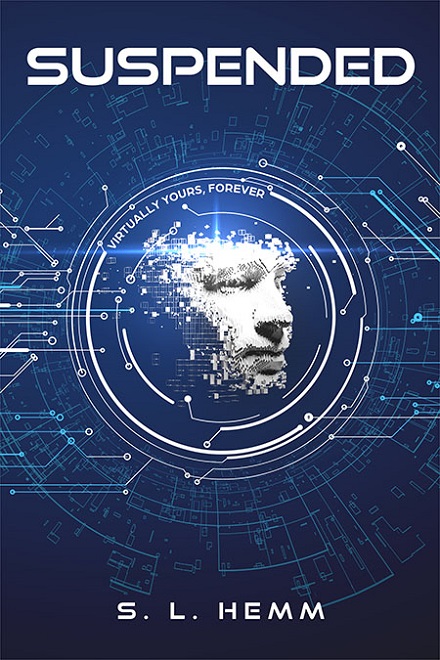 With cancer ravaging his liver, Trey Primeson is willing to do anything to stay alive—for his wife, for his daughter Arianne, for his little boy.

The saleswoman from an enigmatic startup called A Brighter Journey assures Trey that the company seeks out only the most suitable candidates for their service but asks that he not discuss it with anyone outside the family.

Having exhausted other options, Trey takes her up on the offer, only to succumb to a mysterious accident.

Arianne, skeptical that her father’s death was really accidental, is determined to seek out the truth about his demise. But will her guilt and insecurity make her her own worst enemy?

Suspended manages to walk the road down both sides of the technological highway.  It shows the potential for what we can do with it in the right hands, and with noble intentions, but it also shows the possibilities of what can go wrong when it is used for all the wrong reasons.  Suspended is a story that has a decent length, but Hemm’s snappy chapters and interesting subject matter will have readers wrapping things up at a brisk pace.  After that, it’s all about waiting to see what the author comes up with next.  This book, however, is a great introduction to his work, so don’t sleep on it.  Check out Suspended by S. L. Hemm on Amazon today!

The post Sci-Fi Promo – Suspended was originally posted on Tellest.com.  Please note, as an Amazon associate, I earn from qualifying purchases.