Greetings travelers, and welcome to another stop in the Otherworld.  Today, we’re going to be looking at a sci-fi thriller that comes to you from a talented storyteller.  Read on to learn more about Into the Storm: Aliens Among Us.

Author D.J. Adamson knows how to weave a story that features a fair share of suspense.  Her Lillian Dove mystery series had earned her rave reviews, and shows what strong, dynamic characters she can develop.  But in Into the Storm: Aliens Among Us—and the prequel novella—though there are still tinges of mystery in the static-charged air, it’s the thrills that readers will show up for and want to see around every corner.  With a breezy narrative, characters who readers will love to see butt heads against one another, and unfolding secrets abound, Into the Storm is the kind of read that can easily be tackled in a single sitting. 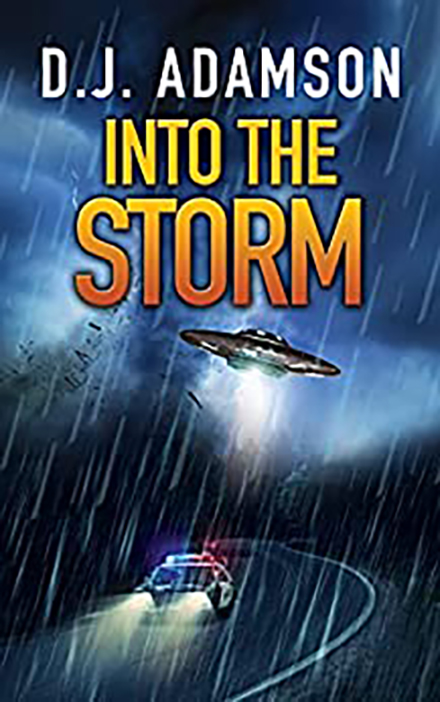 A storm strikes and a mystery deepens at a lighting pace.

One of three boys missing shows up in Sheriff Boggs’ office. What the boy tells sounds farfetched. A man of reason, Boggs thinks a hoax has been played. The story evolves from boys missing to a kidnapping by an alien. Then, from an alien to the kidnapper’s name, Ted Templeton. Boggs realizes all may not be a teenage prank. And he may have more on his hands than he first thought.
​
The mystery deepens when a stranger shows up at the search site. Major Noah Sears forces himself into the investigation. Not only are his viewpoints unrealistic to Sheriff Boggs, but his ability to answer questions before they are asked is unnerving. And his manner of investigation beyond logical.

Where the boys went missing, a burned structure hints more may go on. A girl is found dead. Another girl turns up murdered. The storm breaks. A mob forms and hunts for Ted Templeton. Major Noah Sears begins his own investigation. And in the storm, Sears convinces Boggs to look beyond formed truths.

With short, snappy chapters, and new revelations popping out frequently at the reader, it’s not difficult to see why this book is such a page-turner.  With enough questions that may yet be unanswered by the close of the book, there may yet be a third in the series, but not every question is meant to be answered.  Sometimes it’s the darker mysteries that are found to be most appealing.  But, in either case, readers will come to enjoy Adamson’s sophomore sci-fi thriller for all its accomplishments, even if they do ask themselves the question, “is there something else out there?”  Check out Into the Storm: Aliens Among Us on Amazon today!

The post Sci-Fi Promo – Into the Storm: Aliens Among Us was originally posted on Tellest.com.  Please note, as an Amazon associate, I earn from qualifying purchases.