Greetings Otherworld travelers, and welcome to the last of our stops for today.  We spent time in a somewhat grittier world this morning, and an urban/portal fantasy following that, but we’re going into the afternoon with a more epic scope.  Step into old-world Ireland in this fantastic debut, and read on to discover The Rock of Achill.

Author Jim Sheehan is like a cowboy poet.  When he’s not farming and ranching, he’s developing exquisite epics like The Rock of Achill, a trip back to a fantastic Ireland that is filled with myths and legends and creatures beyond your wildest expectations.  Sheehan effortlessly blends themes of self-exploration, romance, and a majestic world beyond most of our comprehension, and he paints it all with a balladry that shows his passion to his craft.  Join the author and his characters in a journey of magic, grit, and grand revelations. 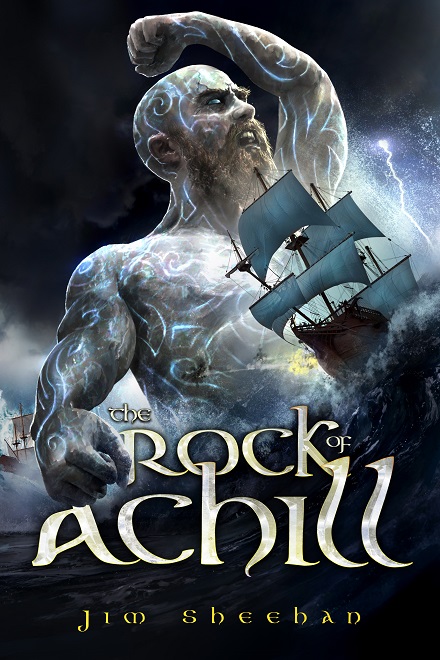 As the last days of mythical Ireland draw to a close, experience the collision of the magical and early-nineteenth-century worlds. On a mission to secure the funds to recover his family land, Donn, an adolescent boy, joins a crew including Irish knights and escaped rebels as they set sail to restore an ancient kingdom. He leaves his new love, Bridget, behind on Achill Island, hoping that he can return to her a propertied gentleman and ask for her hand in marriage. Will Bridget wait for him or marry another? During his travels, the newly knighted Donn faces legendary creatures trying to prevent the recovery of the lost treasures of the Tuatha de Danann.

Through foamy seas, holy knights of a former age sail for glory and God. In the chaotic time of Europe’s struggle for liberty, during the Napoleonic age, find these Irish rebels cutting through Barbary pirates and faerie guardians alike. When on land, they ride their horses, noble of spirit, past the perils that lie in wait. Will Donn, after years of high adventure, return to his beloved and reclaim his family land?

With witches, demons, dancing faeries, and a mischievous clurichaun, this romantic historical fantasy is sure to awaken your heart.

Sheehan’s debut feels like an incredible blend of Irish folklore and Greek epic myths.  This is Donn’s odyssey, and taking the adventure alongside him is something that readers won’t be able to get enough of.  It’s a story with amazing set pieces, sequences, and stakes that keeps you coming back for more.  Already on his way developing a tale that follows his wonderful debut, Sheehan is a fantasy author to keep your eyes on.  In the meantime though, there’s never been a better time to enjoy his stellar first epic.  Check out The Rock of Achill on Amazon today!

The post Historical Fantasy Promo – The Rock of Achill was originally posted on Tellest.com.  Please note, as an Amazon associate, I earn from qualifying purchases.