Greetings fans of fantasy.  We’ve got a nice little look to a future Otherworld book today.  While the story is not out yet, it will be in just under two weeks.  This week has been an awesome one for historical fantasy, and today’s promo will give you something to set your sights on as December heads our way.  Read on to learn more about The Empire’s Bladesmen.

Taking even the briefest of looks at Clay Vagrant’s amazing new historical fantasy, The Empire’s Bladesmen: Forbidden Relics, will show you how passionate he is about not only his prose, but the world that he’s building.  While the setting is based on a real time in our world’s history, the author has made it their own, developing something that drips with their own style and poetic wordplay.  There is a cadence and flow to the writing that fits remarkably within the setting, leaving readers able to envision feudal China through a lens that is thoroughly enjoyable.  Even without the more magical fantasy elements that are deftly woven into the tapestry being crafted here, The Empire’s Bladesmen excels. 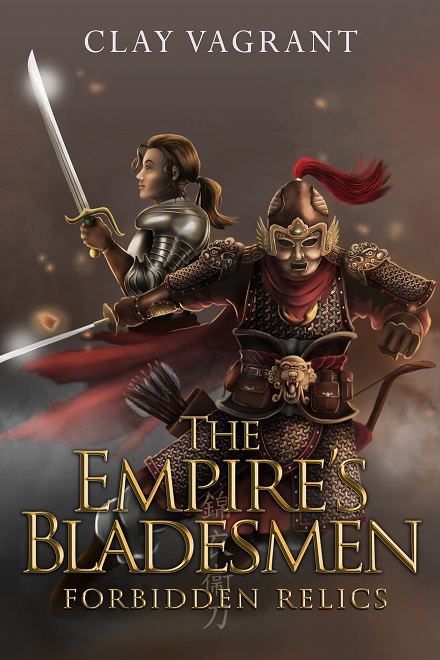 Captain Shao Lian, a battle-hardened veteran of the Ming Dynasty’s imperial army, had become a respected officer in the emperor’s elite bodyguards. This notorious and politically-powerful secret service organization, known as the Jinyiwei (brocade-clad guards), also functioned as the emperor’s premiere intelligence agency and as an extension of his iron fist. They were the empire’s bladesmen.

After Shao Lian was assigned to eliminate a ruthless crime lord after he had seized power over several frontier towns, he discovers that the Blood Foot Syndicate had awakened a powerful and terrifying adversary from a bygone era. Shao Lian and the soldiers in his command suddenly find themselves waging a harrowing war of survival against allied criminal gangs and an ancient being who commands hordes of monstrous man-eaters. Shao Lian later discovers the secrets of prehistory and unravels a conspiracy that set ancient mechanisms into motion that now threaten the Ming Empire and the rest of the 15th century world.

With interesting characters, exciting action, and a dark mystery that is unfolding, The Empire’s Bladesmen is bound to be a new favorite for readers of historical fantasy.  The story expands far beyond its initial scope as well.  In the able hands of Clay Vagrant, this book soars, and it shows the author’s enduring potential.  While more books may be in the pipeline, this book is substantial as a standalone, and is the kind of book that you could go back to again and again.  Preorder The Empire’s Bladesmen: Forbidden Relics on Amazon today!

The post Historical Fantasy Promo – The Empire’s Bladesmen: Forbidden Relics was originally posted on Tellest.com.  Please note, as an Amazon associate, I earn from qualifying purchases.