Greetings Otherworld travelers, and welcome to our next stop along way.  Today we’re going be spending time in our own world, albeit one where something incredible happens that shakes up what we know.  Read on to learn more about The Emperor Returns.

Doctor Clifford Waldman has done an incredible job on his historical fantasy release, The Emperor Returns (The Emperor’s Return Book 1).  Anyone who takes a single glance at the book and its sequel will see that Waldman is passionate about his work and his research, and it bleeds into his story in an almost academic way.  Fans of ancient China will be glued to each page as they learn more about the mystical return of one of the country’s greatest rulers.  The tale also blends well within our own world, giving us a sort of reverse portal fantasy to watch unfold. 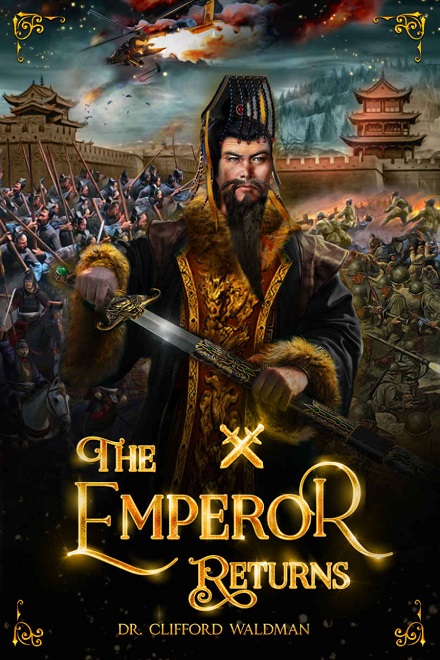 This first book of the Emperor Qin series describes the riveting moments when he and his ancient Army of 100,000 Terra cotta Warriors awake from their 23-century slumber–when they’re resurrected. It leads us through a labyrinth of rapid-firing developments involving explosive military clashes, apparent interventions by God or Nature, enthusiastic embrace by millions around the World–and a growing powerful love between Emperor Qin Shi Huang and his also resurrected Queen Yang Yuhuan.

The story keeps descending into deeper layers of mystery and meaning. All of Qin’s wars involve a hidden struggle within our species–within our psyche–between warring elements. Qin’s battle with literal enemies mirrors this cosmic struggle in all of us. Only if he and we can win this struggle, can our species survive and keep moving forward…otherwise, we’re about to go extinct! The moment of truth is upon us.

Readers have an exceptional adventure ahead of them with The Emperor Returns.  The ancient ruler and his army are brought to life in some very interesting ways that fans are going to love.  Waldman’s books are massive, but he’s been patient and calculating, and had the foresight to see that people would want to rush out and pick up the second book just as soon as the first one was finished.  That’s good news for readers, because the second book is ready and waiting once they turn the final page.  Still, the beginning is a great place to start.  Check out The Emperor Returns (The Emperor’s Return Book 1) on Amazon today!

The post Historical Fantasy Promo – The Emperor Returns (The Emperor’s Return Book 1) was originally posted on Tellest.com.  Please note, as an Amazon associate, I earn from qualifying purchases.