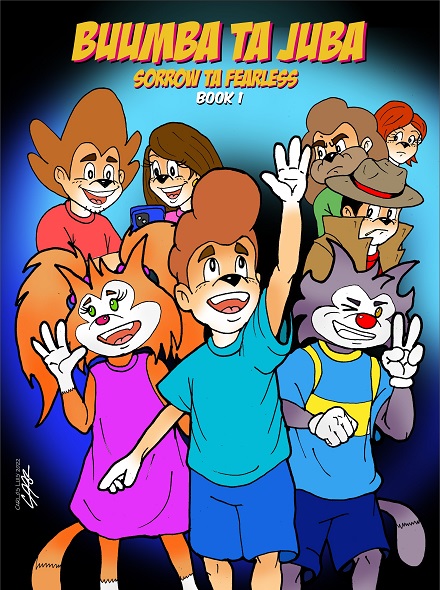 Greetings Otherworld travelers, and welcome to our final promotion of the week.  We’ve certainly run the gamut, hitting a great deal of genres along the way.  It seems right that we’re ending the set with such a departure from the others.  But that’s just what you’ll get from today’s entry.  Read on to learn more about Buumba Ta Juba.

Brought to life by creators Carlos Luis, and Brian “Proffess” Howelton, Buumba Ta Juba: Sorrow ta Fearless is a graphic novel that is unlike many that you’ve seen.  To start, it’s driving focus is its heart.  There is a lot of emotion and positivity here, written with a lot of thought and care by Proffess, and illustrated beautifully by Luis.  It can be described as having a Phineas and Ferb feeling with an almost Animaniacs look, which makes it instantly accessible and appreciated by a wide variety of fans.  Howelton and Luis effortlessly bring a good deal of feelings to the forefront, bringing a respectful amount of humor to a story about identity and community.

Buumba Ta Juba is a novel mixed with fantasy and realism about their path to discovery and the roadblocks.

It’s a story about a kid named Ji, born in Denver, Colorado, where life seems terrific. Except his parents paid little attention to him. They consume themselves in technology and social media, pushing Ji aside for their timeline. Hatred towards technology brews in Ji, leading to his desire to control it to destroy it. But there’s one problem, he doesn’t know how technology works. An accident occurs to Ji at a tech conference that may help his cause or further his detestation. On his quest to obliterate cybernetics, Ji crosses paths with characters that intertwine with his life for the better or worse.

This novel will be a two-part graphic novel series that will start with the background of how these characters became who they are, leading to comic book issues. Buumba Ta Juba will have pain, strength, success, fantasy, struggle, truth, lies, creativity, and laughter! Just like a comedian can take the light of a negative and make you laugh, simultaneously bring attention to a negative. We want BTJ to entertain all those who read it.

Created by some very talented people, Buumba Ta Juba has a lot of endearing qualities that position it as a story that can help readers cope with some feelings of their own.  Luis and Proffess bring the fun and the funny, ensuring their graphic novel is something that anyone can pick up and enjoy.  It’s a project that has been percolating for some time, and these creators have been hard at work bringing it to life with the love and respect that it deserves.  Check out Buumba Ta Juba: Sorrow Ta Fearless and get on the mailing list before its release by going to this link at Pugnacious Publishing.