Greetings Otherworld travelers, and welcome to a new visit to the vast and beautiful Otherworld.  Today, I have the great privilege of welcoming back one of our allies, who is offering up an opportunity to dive into one of his worlds in a more affordable way than ever.  Please welcome back J.S. Morin, and his series starting trio of books, Twinborn Chronicles: Awakening Collection.

Twinborn Chronicles is the epitome of a fan-generating series, and it is a wonderful introduction to the wildly talented J.S. Morin.  We’ve featured the prolific storyteller on Tellest several times now, and each time something new comes our way, we continue to be blown away by the workmanship and spectacle that comes from the mighty talespinner.  Twinborn Chronicles: Awakening Collection, is a worthy set of the first three books in the incredible saga, explosive battles, intriguing subterfuge, and characters that you’ll fall in love with.  All of it is wrapped into a rich and engrossing world filled to the brim with details that will stick in readers’ minds well after they’ve turned the last page. 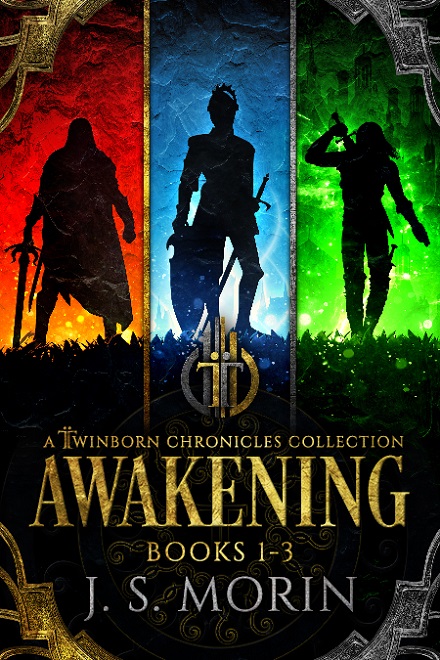 Caught in plots between two worlds, his only hope is to awaken the link between them.

Kyrus had lived a quiet life as a scribe until his dreams begin seeping into his waking life. Fanciful tales of magic and battle turn out to be real. In his sleep, he witnesses the adventures of his twin. Kyrus is swept up in the intrigues of those who already know of this connection between worlds.

As his knowledge of the two worlds grows, so does his entanglement in the intrigues between them. Kyrus discovers friends, lovers, and adversaries among the twinborn. His knowledge of magic grows until he becomes a valuable pawn for masterminds of plots that threaten empires.

Kyrus must learn a deadly game against opponents who already know the rules. He must join forces with his twin to combat threats in both worlds. One misstep or misplaced trust and Kyrus could find himself dying… twice.

Twinborn Chronicles: Awakening is a three-book collection chronicling the adventures of heroes who alter two worlds. For fans of epic fantasy who aren’t looking to start another unfinished series, the Twinborn Chronicles provides multiple new worlds to explore and all the closure you’ve long been denied.

Readers who pick up this collection looking for something substantive will be in for a treat, as it gives them something meaty to sink their teeth into.  So much unfolds in Morin’s work that they’ll feel satiated, but the tremendous quality in which he tells his tales will leave them hungry for more.  This first trio of books lays the foundation for not just another few books, but an entire universe that has been meticulously crafted, honed, and delivered.  If you enjoy getting lost in fantasy worlds, J.S. Morin is the author of your dreams, and this set of books is the one that you’ve been waiting for.   Check out Twinborn Chronicles: Awakening Collection on Amazon today.  If you move quickly, you’ll get the set for a massive nine dollars off!

You’ll also be able to see Morin’s books anywhere else they’re sold, from Barnes and Noble, to Apple, to Kobo.  And if you’re looking to see some of the other books that Morin has written and Tellest has promoted, click here.