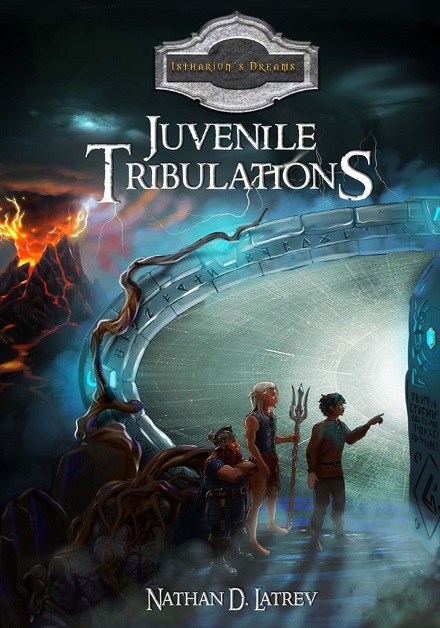 Ladies and gentlemen, it has been my great privilege to herald the wonderful work of Nathan D. Latrev every few weeks.  I am beyond excited to see what else he has been cooking up in his world, but I want as many people as I can find to dive into his world of reimagined fantasy.  We are going to take one last look at his world of Isthariun, before we stop to talk to the author himself.  Read on to learn more about Juvenile Tribulations.

Nathan D. Latrev makes a stunning splash with his debut fantasy, Juvenile Tribulations: (Isthariun’s Dreams).  Arriving first in France, it has been translated and presented stateside as of several months ago,  has been out stateside for about a month-and-a-half now, and it is building traction.  Latrev, a talented talespinner, is amassing a fervent fanbase, who can’t shy away from his captivating world, and the rich characters who have stolen their hearts.  Juvenile Tribulations is warm and inviting at some points, but it doesn’t shy away from thrills and suspense, adding appeal for a wide variety of readers.

Two hundred years have passed since the last great war of the five peoples. Peace reigns, in appearance, on the vast world of Isthariun.

In Valendas, the human capital, Eskalys, a young boy, and his childhood friends, Firnaël, the fishing elf, and Gugnir, the forest dwarf, live a golden and happy youth, hardly disturbed by their numerous pranks.

But their last joke during the warm-season party was not to everyone’s taste, especially their respective families, who decided to separate them as soon as possible.

Embarked in spite of themselves in epic adventures, will they manage to find their way? Will they discover the origin of the strange elements that could call into question the very existence of their universe?

Follow the adventures of the three friends and other heroes as singular in a fantastic adventure, where they will meet amazing creatures, where magic will be omnipresent and fights…and often deadly!

Juvenile Tribulations is a powerful debut.  Latrev put his passion into this story, and it shines through from the first page to the very last. It’s well-paced, and it easily demonstrates his hold over the world he’s created, although you’ll be eager for much more by the turn of the final page.  If you’re looking for a book that has great characters, a familiar setting with twists on what you typically come to think of when it comes to fantasy, and the promise of much more to come, this could be the book for you.  Check out Juvenile Tribulations: An Epic Fantasy Adventure! (Isthariun’s Dreams) on Amazon today!

The post Fantasy Promo – Juvenile Tribulations: An Epic YA Fantasy Adventure Novel of Magic, Warfare and Fantastic Creatures (Isthariun’s dreams) was originally posted on Tellest.com.  Please note, as an Amazon associate, I earn from qualifying purchases.