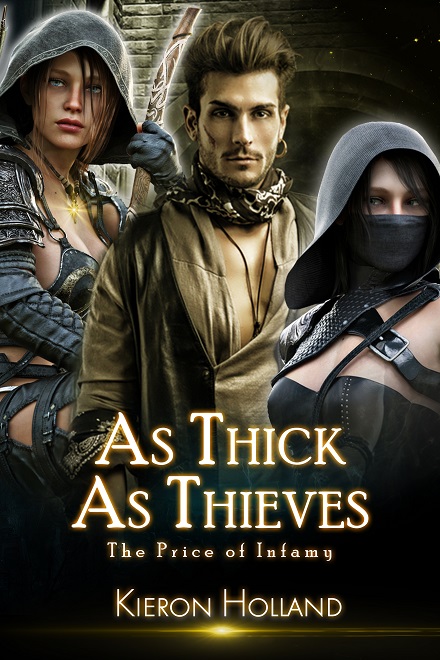 Howdy otherworld travelers, and welcome to another stop along our journey to find excellent fantasy stories.  We’ve got just the one for you today, as we look at an enjoyable tale by a talented storyteller.  Read on to learn more about The Price of Infamy.

Author Kieron Holland has a penchant for writing rich and interesting characters that are more than just two-dimensional set dressing.  In his fantasy debut, As Thick As Thieves: The Price of Infamy, he ensures that readers are invested in the fates of his excellent cast, and that they’re rewarded for joining the ride.  Holland excels at writing entertaining action scenes that grab readers and keep them interested until the next big twist or turn, but he’s just as crafty and witty as his characters.  Alongside his delightful use of prose, he also injects a dash of humor in all the right places.  Though the book follows thieves, it’s certainly not without its whimsy.

A priceless treasure is on its way to England:

The dowry of an unwilling bride.

The Duke will risk war to possess it.

The church is desperate to recover it.

And every thief, crook and pagan cultist in the land wants it.

For one thief, his fate, the fate of his family and everyone he knows will depend on him stealing it.

Holland flexes his screenwriting muscles in some great ways to tell his story, so it’s no surprise that it’s so expressive and cinematic in its presentation.  Readers will almost feel as thought the action is bursting out of the page.  All along the way, the author tells a great tale that you can go back to again and again.  It would be downright criminal not to get more out of James and his companions, but for now, this excellent story will more than suffice.  Check out As Thick As Thieves: The Price of Infamy on Amazon today!

The post Fantasy Promo – As Thick As Thieves: The Price of Infamy was originally posted on Tellest.com.  Please note, as an Amazon associate, I earn from qualifying purchases.