Welcome Otherworld travelers, as we venture into a new month of the year, in search of more great stories and talented authors.  I’ve been sitting on this one for a little while because the storyteller, as calculated as he is, had this in my queue for a while, biding his time to become one of your new favorites.  Read on to learn more about the darker fantasy, Breachman.

Right from the opening page, you can tell that author Chris Barker has the means to captivate you.  In his dark fantasy debut, Breachman: A Medieval Fantasy Adventure Story, Barker effortlessly blends rich character moments with wonderfully descriptive action and battle passages.  It’s as rich as it is dark, showcasing the horrors of war, and taking readers deep into the psyche of the cast that will occupy their minds long after the last page is read.  Barker knows how to do a lot with a little, and tension is built from the moment you first see the harrowing reality of the city of Yrfrite, and the kingdom of Tydrian, and what is at stake. 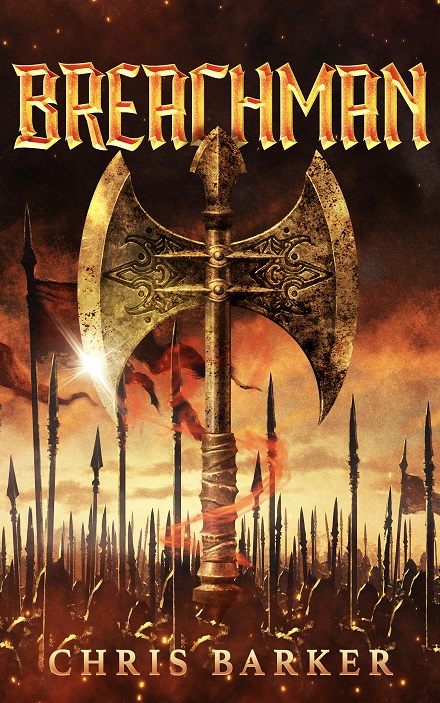 Volchak, Commander of the Breachmen, has spent a lifetime fighting. Now he has time for just one more war. But when you have to fight to find peace, how can it ever end?

With the advancements he has made in the art of anatomy, Stirc will perform miracles of medicine. If a few more subjects need to be sacrificed along the way, then so be it.

Kaelith is a dashing warrior, a soldier of fortune, a famed intellect and quite the looker. Or so he will tell you. But he’s running out of friends, and is about to play the last trick he has up his sleeve.

And Flea? She is just happy to be alive. When you’re a seventeen-year-old convicted murderer fighting for the Breachmen, being alive is something to hold on to.

The people of Yrfrite will soon be crushed under the boots of the Royal Guard. The rebel Duke can’t stand against the might of the King’s army and the ferocity of the Breachmen. Yet someone is pulling the strings of this conflict. Soon, something will change the fight forever.

Breachman is the debut novel by author Chris Barker – a British author with a love of action, low-fantasy and building characters to love and hate.

The story is one of a tiny kingdom, cut off from any knowledge of the wider world around it, being torn apart by forces within. One side of the long-running civil war is fighting to restore peace and order, whilst the other seeks freedom from oppression of a monarch and his quasi-religious government.

In a land where resources are scarce, technology and culture has developed in new directions.

But newly found abundance threatens to shake the balance and bring a bloody end to the fighting.

With plenty to explore, whether it be the world Barker creates, or the mysteries he unfolds, there’s plenty to enjoy here in Breachman.  And, thanks to great characters with witty remarks and internal thoughts at hand, readers might also find a new catchphrase or two that they like to use.  For a debut, this is a stunner, and it will easily make dark fantasy fans, and fantasy fans in general eager for what could come next.  Even though it ends on a solid enough point, there’s room enough to follow this story, to see where the cast goes from here.  For now though, take the time to enjoy this solid bit of exquisite fantasy.  Check out Breachman: A Medieval Fantasy Adventure Story on Amazon today!