Howdy folks.  We’re back for book three of a very busy, very exciting week.  As such, it warms my heart that we get to take a look at a lovely debut fantasy novel today, which you won’t soon forget.  Let’s take a look at The Tainted Hive.

Alan Salt is a witty writer with a sardonic spell to him, and he delivers an irreverent spin on fantasy with The Tainted Hive: Book One: The Cobblestone Druid.  Certainly, this book would stand as wonderful fantasy on its own, for the world that Salt has crafted is lively and lived-in.  But the humor that is draped around the town of Pawkett is sure to stick with readers, and compel them to tear through the story in record time.  Salt also benefits from developing characters that readers enjoy following about, as seeing them in their quirky scenarios is sure to delight. 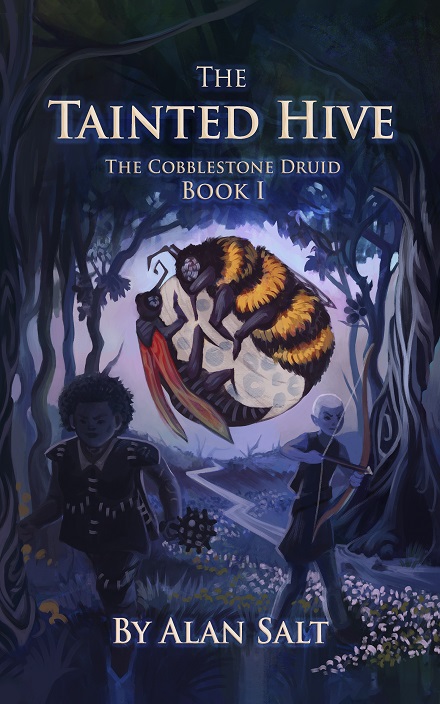 The wonderous village of Pawkett is famous for its red-gold honey, an enchanted delicacy worth more than diamonds. The town’s reputation is shattered when elite citizens die at an early tasting. Is the honey poisoned? Who is to blame? Investigators are summoned; only those desperate enough to risk their life apply.

Meet Carmen Avel, a young forest elf in exile for treason against her god. On the run and haunted by a presence she cannot comprehend, Carmen will stumble into a nightmare a thousand years in the making. Pawkett has secrets. Children vanish, never to be spoken of again. Legends tell of a monster that stalks the nearby woods.

Suspicion abounds, even among Carmen’s companions. Who can she trust? The disgraced sergeant so poor her armor doesn’t match? The copper-eyed diplomat with the predatory smile? Can she depend on the genderqueer priest who sees the world in shades of gray?

Surrounded by blood magic, lies, and peril, the group must work together – or be destroyed. In a final confrontation to decide the fate of Pawkett, will Carmen embrace her destiny, or will she succumb to the ancient mystery of The Tainted Hive?

Salt creates a vibrant world that you won’t soon want to leave, and before you’re done thumbing through the pages of this tale, you’ll be eager for the next.  Its magic and whimsy has true staying power, and we can only hope that Salt is hard at work on the sequel.  If you’re looking for a lighthearted fantasy with a touch of darker humor, this is the book for you.  Check out The Tainted Hive: Book One: The Cobblestone Druid on Amazon today!

The post Fantasy Promo – The Tainted Hive: Book One: The Cobblestone Druid was originally posted on Tellest.com.  Please note, as an Amazon associate, I earn from qualifying purchases.